The Sterling Stuckey Lecture Series grew out of conversations the UC Riverside History Department had in the summer of 2020 about race, racism, policing, violence, and the deep historical roots of our current political climate. In an effort to educate ourselves and develop better tools, vocabulary, and knowledge from which to shape a more responsive and responsible department, we initiated a lecture series. As Dr. Cliff Trafzer wrote: “We wanted to voice our support for Black Lives Matter, and at the same time, share cutting-edge research with people interested in listening to and learning from first-rate scholars. During difficult times, the department launched a new lecture series and named it after our friend, colleague, and mentor, Sterling Stuckey, who passed on August 6, 2018.”

The Sterling Stuckey Lecture Series (2020-2021) organized seven exceptional talks.  The series kicked off with the stimulating lecture of Dr. Stephanie Jones-Rogers (UC Berkeley), who captivated the audiences with stories of white slave-owning women. Dr. Jones-Rogers compelled us to rethink the story of antebellum slavery and the impactful ways gender, race, and power intersected. She was followed by UC President’s Postdoc Sarah Whitt (Choctaw Nation of Oklahoma), who interrogated the long history of white Americans policing and apprehending Indigenous, Black, and other populations of color. Dr. Whitt explored the long and punitive history of racialized surveillance.

In the Winter of 2021, the Sterling Stuckey Lecture Series Committee hosted talks by Dr. Kevin Dawson (UC Merced), Dr. Harry Nii Koney Odamtten (Santa Clara University), and Dr. NDB Connolly (Johns Hopkins). These three scholars presented on radically different topics: Enslaved Salvage Divers, Edward Blyden, and African Intellectual history, and the centrality of race in the shaping of the discipline of history and History departments. All their talks nonetheless shared urgency about the need and value of African history, especially (but not exclusively) to the ways in which it connects to discussions of race, power, and resistance.

Dr. Yatta Kiazolu (UC President’s Postdoctoral Fellow in Ethnic Studies) and Dr. Donald Fixico (Arizona State University) were our two final speakers in the Spring of 2021. Dr. Kiazolu spoke of the National Council of Negro Women (NCNW), centering on stories of gender, struggle, and activism. She also spoke about her own community engagement and social justice advocacy. Dr. Fixico spoke about the stories of three African American freedmen, helping us unpack the layered and complicated histories of race, slavery, and freedom in Indian Territory.

Over 350 individuals attended these lectures, including undergraduate and graduate students, members of the history department and scholars from other programs at UC Riverside, faculty from all over the country, and members of our local community as well as relatives of Sterling Stuckey. The Sterling Stuckey Lecture Series (2020-2021) not only featured top-notch presentations and scholarship but also showcased the ongoing and meaningful impact of Dr. Sterling Stuckey’s legacy.

During the Spring and Summer of 2020, protests developed spontaneously across the United States in response to the most recent police murder of an African American man, George Floyd. As historians, we recognized that issues of race and racism had characterized the length and breadth of American history, and members of the Department of History at the University of California, Riverside, sought a collective response to the continued killing of African Americans, people of color, and people with different sexual orientations. During a very trying time, faculty members wanted to respond to the murders and continued violations of civil rights in a meaningful manner, one that offered a response that would educate others. We wanted to voice our support for Black Lives Matter, and at the same time, share cutting-edge research with people interested in listening to and learning from first-rate scholars. During difficult times, the department launched a new lecture series and named it after our friend, colleague, and mentor, Sterling Stuckey who passed on August 6, 2018.

A Civil Rights activist and brilliant scholar, Sterling spent his life challenging unfounded and poorly constructed histories of  slavery, and of enslaved African American. Sterling understood that America’s past was a history of racism and inhumanity. He would have been disgusted but not surprised by the recent murders of African American men, women, and children, including the police murder of nineteen-year-old Tyisha Miller of Riverside. Sterling’s research stood against those that claimed that slaves had no agency and that only others dictated the ebb and flow of Black lives. Instead, he focused his research on slave nationalism and African American contributions to music, art, oral literature, theater, and dance. In many ways, African Americans countered negative power, and many continue to counter racism with intelligence, ingenuity, and sheer survival. Sterling countered efforts to demean people of color and dismiss contributions of African American scholars, a project that continues today by people, governments, institutions, and organizations.

Sterling Stuckey taught his students and colleagues to be fearless in their research and writing, which often cuts against the grain of those who research outside of communities, peering into the cultures of others without entering that culture in a meaningful manner. Sterling supported community-based research developed by those that truly understood African and African American cultures by learning from elders and community scholars as well as critically analyzing written sources.

All of the Sterling Stuckey Lecturers conduct research in the shadow of our friend, mentor, and colleague. We honor Sterling through this lecture series, which in turn honors innovative scholars who follow in the path Sterling Stuckey made for us. Throughout the year we welcome our special guest speakers and all of those that wish to join us. Together we stand in solidarity with those that oppose racism and racist to further our knowledge of the African American past, present, and future. 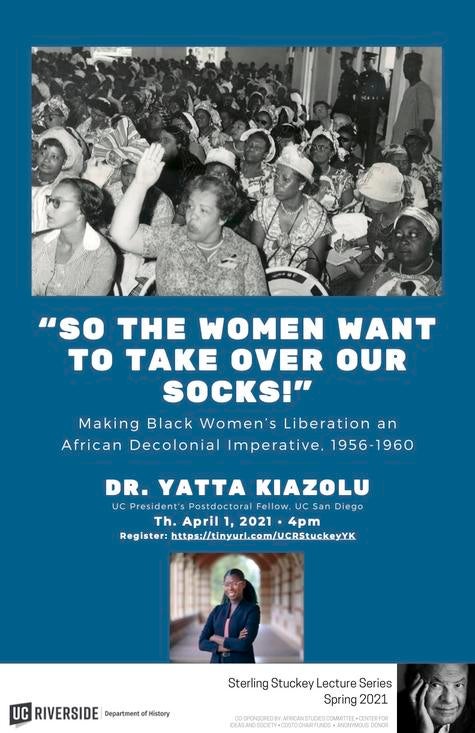 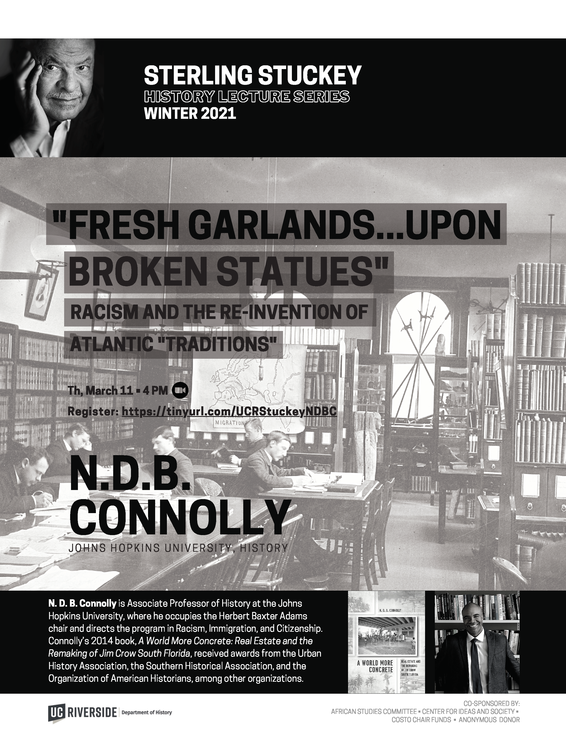