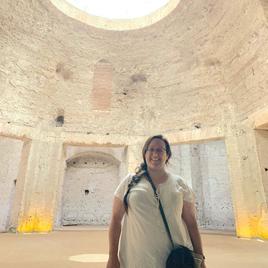 I am interested in late antique Roman History focusing on the transformations of the social and political structures in the late fourth century, in particular, the representation and role of the emperor and imperial power. My research focuses on how imperial power is acquired and legitimated at the moment of succession and usurpation and the role of imperial women. My M.A. focused on the Historia Augusta and the role of sex and gender in imperial biographies, particularly how imperial mothers and wives are depicted in relation to the power of the emperor. Currently, I am researching the tension between changes in imperial rule and succession, the role of Christianity in imperial power, and the representation of women in late fourth century Latin texts during a period when the Empire was seeking to secure its borders and assert its authority.

The Ransom Research Award: Awarded by Connie and Roger Ransom in 2019